skip to main | skip to sidebar

When it first appeared in print in 1995, it made a bit of a splash, even becoming a bestseller. Undoubtedly this was due to longtime fans of Alcott wanting to read the manuscript that had remained unpublished all these years. Alcott, of course, is best known for Little Women, and to a lesser extent Little Men and Jo's Boys. After reading A Long Fatal Love Chase, I'm pretty confident that the aforementioned books will remain the highlights of Alcott's legacy, and the latter will slip back into obscurity where it belongs; a footnote to her career.

Last August I posted 20 glaring omissions in my "have read" list. Since then I've knocked a few off that list (To Kill A Mockingbird, Island of the Blue Dolphins, Lolita, and Pride and Prejudice). And while I hope to someday get to the others, Little Women might remain unread. I saw the Winona Ryder movie version, and while I know you can't judge a book by its movie, I was so incredibly bored by it that I find it hard to face the book at all. I thought that at least I could knock Alcott from my list by reading A Long Fatal Love Chase.

What's surprising is that while I thought A Long Fatal Love Chase had more than its share of problems, being boring is surely not one of them. I'll admit, I read a few reviews of this before attempting it and I knew its reputation for being overly sensational. Still, when it opened with Rosamond declaring that she'd "gladly sell [her] soul to Satan for a year of freedom" and suddenly a stranger resembling Mephistopheles showed up, I was pleased. A bit over the top, I thought, but at least it wasn't dull. I was ready to be entertained, who cared what the critics said.

Oh but they were right.

As the story progressed, the stranger Tempest, conned Rosamind into believing they were married. When she finds out the truth, that the ceremony was a sham and that he is married already to another woman, Rosamind bolts and thus begins the long stupid love chase across Europe. I'm not averse to a stalking story. It could be written well, and as many have pointed out, seems to be a modern theme (though I'm sure stalking itself isn't a new phenomenon).

No, stalking isn't the problem, it's the melodrama, cheese, and artificiality of the writing. One of my major problems with Dan Brown's Da Vinci Code was his insistence of ending every chapter with a cliffhanger. At least he had the good sense not to also rely on exclamation points. This from the end of Chapter Six in Alcott's novel:

"With a sigh of relief she rose to her knees and was about to seat herself for an instant on a low mound behind her when, as the moon shone full through the swaying branches, she saw with a cry of terror that the mound was like a new-made grave!"

I'm not opposed to exclamation points per se, but Alcott threw them in for dramatic effect the way lame sitcoms add laughtracks for comedic effect.

Furthermore, it was hard to get a sense of any chase when Tempest had the uncanny ability to pop out of anywhere. At one point Rosamind has gone into a confessional, and who should be on the other side but Tempest. It seemed as if he was never more than ten feet away, but instead of adding tension, it just came across as silly when he'd pop out of nowhere like a whack-a-mole.

My last major beef with the book was the way characters explained their actions in vivid detail. It just didn't ring true when characters would rattle on filling in missing pieces of the plot.

"This last plot was Baptiste's; I knew nothing of it till he telegraphed to me to come on at once as you were ill but would not yield and purchase freedom at the price I set. I hurried away at once to find you gone, but Baptiste told me his plan and I was forced to be satisfied. He said your entreaties would have won him but for his vow to me. Wishing to serve us both, he permitted you to escape but sent a spy after you and followed by rail in time to be prepared for you here. He chanced to have a note sent..."

And this goes on and on.

But I shan't. A Long Fatal Chase was surprisingly entertaining, but ultimately a silly book.

(Yes, I'm quite aware that there are much better stalking songs out there. But before anyone points me in the direction of The Police, Blondie, et al, I wanted a soundtrack as lame as the novel.)

Cross-posted at The Book Mine Set.
Posted by John Mutford at 6:23 PM

I know that this is the wrong place, but why did you have me sign up to you blog? It is on my blog list. I forgot the reason why. Thanks, Judy http://interglacticbookworm.blogspot.com

I think at some point or another you said you were interested in joining the challenge (to read an unpopular book by a popular author). The reason I had you sign up was so that you could post a review of that book here when you were done. There were a few people who wanted to join, but as of yet, no one has posted!

Where's the list? I posted a review of J M Barrie's The Little White Bird and I really couldn't get into it. The date I posted the review was May 31, 2008. Judy

Hi Judy,
Did you post it on this blog or your own?

It is on my blog. I cannot get a specific link (address) for that particular post. My blog addy is: intergalacticbookworm.blogspot.com

I forgot the http:// Sorry.

What is your favorite book, and why? 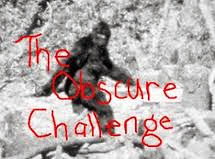 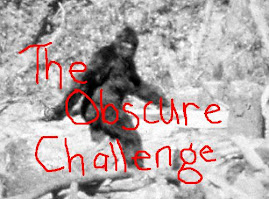 If you wish to be a member, email John jmutford[at]hotmail[dot]com